The year 2020 ended with an inflation bang in the 14 countries listed on Hanke’s Inflation Dashboard. To qualify for entry, a country had to end the year with an annual inflation rate of 25 percent or more. I made the measurements of each country’s inflation by using high‐​frequency, free‐​market exchange‐​rate data in combination with Purchasing Power Parity (PPP) theory. For countries with elevated inflation rates, the PPP method has proven very accurate and reliable.

It is important to stress that my PPP inflation measures diverge from the last recorded official measures for each country (see the table below). For example, the accurate PPP inflation rate for Argentina on December 31, 2020, was 120 percent per year, whereas the last officially reported inflation rate, for November 2020, was 35.8 percent per year. Why was there such a huge gap between my PPP measurement and the official number? For one, the reporting dates are not the same, but a one‐​month difference cannot explain the gap of almost 85 percentage points. Given Argentina’s record, the official data could be too “low” because of data manipulation and measurement error. Don’t forget that the International Monetary Fund (IMF), in an unprecedented move, called out Argentina for doctoring its inflation statistics in 2012. I don’t know to what extent those two factors might have contaminated Argentina’s official November 2020 inflation data. 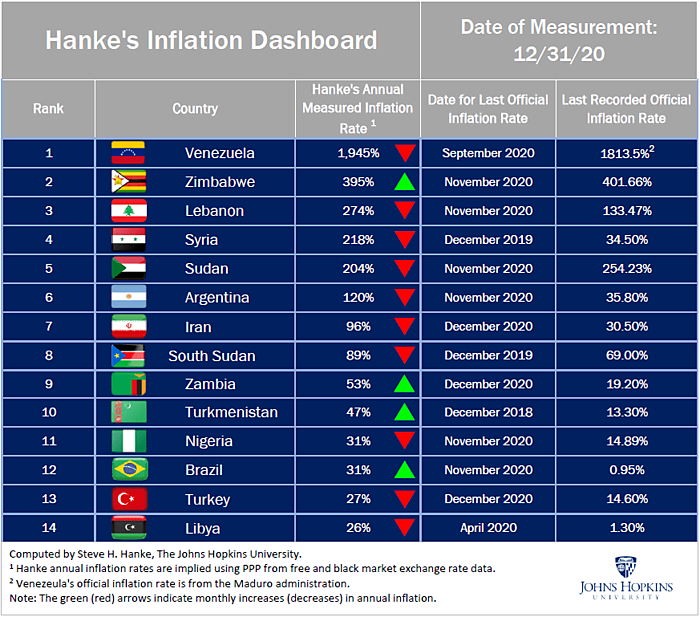 The biggest factor accounting for the difference in rates is that the “basket” of goods used by the government to construct the consumer‐​price index includes only 324 items. This may sound like a large number, but it represents a small fraction of the items bought and sold each day in Argentina. In contrast with the official basket, a PPP basket includes all goods, services, and assets that are exchanged in Argentina. This means that the PPP basket is a comprehensive, all‐​inclusive basket. So my inflation measure incorporates price changes for everything bought and sold in Argentina, not just those items in the government’s basket.

In addition to differences in the size of the baskets and timing of measurements, the purchasing‐​power methodology differs from that used in official inflation measures. The official measures are calculated by determining the changes in prices of items (in local currency) in the official basket. These prices are gathered by sampling prices for items in the basket. Then, the items in the official basket are assigned weights, and a price index is produced. In contrast, PPP relies on exchange‐​rate data and price‐​level differentials between two countries. PPP avoids the measurement errors and weighting problems associated with official price indices.

When you look at Hanke’s Inflation Dashboard, you will see that Venezuela tops the list of inflators once again. Indeed, it has been in a state of hyperinflation since late 2016. To qualify for that dubious distinction, a country’s inflation rate must be greater than 50 percent per month for at least 30 consecutive days. The only other country experiencing hyperinflation is Lebanon. Lebanon’s became the 62nd episode of hyperinflation in history this past July and is the only MENA country where inflation has ever crossed this threshold. Zimbabwe, while not going through hyperinflation at present, currently holds down the world’s second‐​highest annual inflation spot. But the country is no stranger to hyperinflation. In November 2008, it experienced the second highest hyperinflation in history, when prices were doubling every 24.7 hours. If that wasn’t bad enough, Zimbabwe experienced a second hyperinflation in October 2017, when the monthly increase in prices hit 185 percent.

Let’s take a closer look at Hanke’s Inflation Dashboard and the difference between accurate PPP inflation measures and the official ones. To understand the difference, we must first understand what Purchasing Power Parity theory is, and how I use it to measure inflation. The PPP concept can be traced back to the Salamanca School in 16th‐​century Spain, but it wasn’t until the famous Swedish economist Gustav Cassel penned an article in the Economic Journal in 1916 that the concept was named “purchasing power parity.” Since Cassel’s 1916 article, PPP has been researched to death.

The primary focus of that research has been whether exchange rates change to reflect movements in price levels between countries — in other words, whether changes in an exchange rate are equal to the inflation differential between two countries over the same period. Over long periods of time, the evidence supports PPP. That is, currencies issued by countries with “high” inflation rates devalue relative to currencies issued by countries with lower inflation rates. That’s why Switzerland, the country with the lowest average annual inflation rate over the past 120 years, has the strongest currency. Indeed, the Swiss franc has appreciated against all currencies over the past 120 years.

As it turns out, as a country’s inflation rate increases to very “high” levels, the “long run” becomes the “short run,” and the inflation rate almost perfectly matches changes in that country’s exchange rate with, let’s say, the U.S. dollar. In a frequently cited 1976 paper, economist Jacob Frenkel found an almost perfect fit between changes in Weimar Germany’s exchange rate from 1922 to ’23 and changes in both its consumer and wholesale‐​price indices.

Despite more than a century of scholarly study and empirical findings that support the PPP method, there remain naysayers. In a January 6 Financial Times piece, Jamie Powell states:

Over two years ago, FT Alphaville took a close look at economist Steve Hanke’s dubious claim that inflation was running much higher in Turkey than the country was claiming. By reverse engineering an inflation number from the dollar/​lira exchange rate, Mr. Hanke had posited the figure was closer to 40 per cent rather than the reported 11 per cent. His logic, as it turns out, was all over the place — as the FX figure is only one of the many supply‐​side factors that determines a country’s CPI. And that’s before even looking at what’s going on with demand.
Are the results of applying PPP to determine implied inflation rates in countries with rates of inflation over 25 percent per year “dubious”? No. There is a mountain of evidence to support the standard use in these cases of an old, reliable theory. It’s rather clear that naysayers are either unfamiliar with the vast literature on PPP, or simply don’t understand it. Then again, I’ve long thought that 95 percent of what one reads in the financial press is either wrong or irrelevant.

Meanwhile, let’s take a look at the IMF’s year‐​end inflation forecasts for Venezuela, a country that has been engulfed by severe inflation since November 2016. Every October, the IMF makes a forecast for the annual inflation rate that it expects Venezuela to register at the end of each year. The table below contains the IMF’s end‐​of‐​year forecasts for Venezuela since 2016. In addition, it contains my actual year‐​end measurements for each year’s annual inflation since 2016. As you can see, the IMF’s forecasts are way off the mark, despite being made only three months before year‐​end.

Even though I can measure hyperinflation accurately using PPP, no one has ever been able to forecast the magnitude or direction of hyperinflations. But that hasn’t stopped the IMF from producing forecasts for Venezuela. It also hasn’t stopped the press from dutifully reporting with reverence and without fail the IMF’s wildly inaccurate forecasts. Never mind. Confusion reigns. It’s just another case of my 95 Percent Rule in action.

Click Here to Read the Article on CATO institute

We use cookies on our website to give you the most relevant experience by remembering your preferences and repeat visits. By clicking “Accept All”, you consent to the use of ALL the cookies. However, you may visit "Cookie Settings" to provide a controlled consent.
Cookie SettingsAccept All
Manage consent

This website uses cookies to improve your experience while you navigate through the website. Out of these, the cookies that are categorized as necessary are stored on your browser as they are essential for the working of basic functionalities of the website. We also use third-party cookies that help us analyze and understand how you use this website. These cookies will be stored in your browser only with your consent. You also have the option to opt-out of these cookies. But opting out of some of these cookies may affect your browsing experience.
SAVE & ACCEPT