If fallen countries are excluded from the world economic chart, in 2020 the Argentine peso was for the third consecutive year the currency that was most devalued in the world, which in turn had a very strong effect on the hard currency value of Argentine companies. whose market capitalization, measured by the price of the ADRs of national companies abroad, fell on average by 34% in dollars.

It is revealing, however, to observe which currencies devalued more than the Argentine peso, to put the case of our country in context. In this regard, a ranking prepared by Steve Hanke, a professor at Johns Hopkins University and an enthusiast of convertibility systems or currency board, and published by The National Review magazine, shows that in the last year five currencies have devalued more than the Argentine peso. But what five !: the Venezuelan bolivar, the “new dollar” of Zimbabwe, and the Lebanese, Syrian and Sudanese pounds, which lost, depending on the case, between 95% and two-thirds of their value.

n all cases, they are countries with serious political and economic problems, from the long decline of the regime headed by Nicolás Maduro, to Sudan, the poorest country in Africa. Countries that international political analysts often call “failed states.” 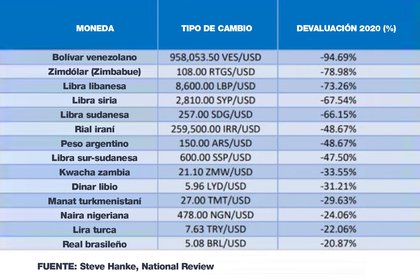 The ranking of the currencies that devalued between the end of 2019 and December 18, 2020. The Argentine peso ties for sixth place with the Iranian rial, but has probably surpassed it in the days since.

The ranking prepared by Hanke includes the 14 countries in the world that in 2020 had inflation rates above 25 percent. At the top is the most well-known case locally: Venezuela, whose government has been denounced by the UN for extrajudicial executions, torture and other human rights violations (a report whose vote provoked strong internal dissidence in the government coalition that heads Alberto Fernandez) that led to the exodus of almost five million Venezuelans, their currency, The Venezuelan bolivar lost almost 95% of its value in the last year and implied an inflation of 2,436%. Hanke estimates the degree of informal dollarization of the Venezuelan economy at 80% and recalls that Maduro himself has considered the possibility of legal dollarization.

Zimbabwe, the second country in the ranking of countries whose currency was devalued the most, suffered a process of hyperinflation that at the end of 2019 led to the creation of the RTGS dollar (in English: Real Time Gross Settlement Dollar), informally called Zimdollar to Zollar, which failed to stabilize the situation: since its launch and Until December 18, the Zimbabwean lost 79% of its value (that is, the US dollar almost five times its value in terms of the Zimbabwean currency). According to Hanke, in the last year inflation in Zimbabwe was 343 percent.

Maduro, who also likes to appear in military uniform, along with Diosdado Cabello, strong man of the “Bolivarian National Armed Force”, main supporter of the Venezuelan regime

The third place in the devaluation ranking is occupied by the Lebanese pound, this is the currency of a country trapped in a constant civil and religious war and contention territory between terrorist groups like Hezbollah and countries like Syria, on the one hand, and the Israeli army, of the other. Hanke estimates the 2020 inflation in Lebanon at 286%, but says that the “good news” is that the parliament is considering the possibility of installing a “currency board”, that is, a system of currency convertibility, like the one that Argentina had between April 1991 and the end of 2001 and of which Hanke is an enthusiastic promoter.

The next place is occupied by the Syrian pound; that is, the currency of a country devastated by a war that will soon turn ten years old, after the dictator’s decision Bashar al-Assad of not giving in to the demands of democratization of what was, in February 2011, “the Arab Spring.” Since then, many Syrian cities have been destroyed in a war that has since killed more than 500,000 people, the murder of thousands of civilians, the involvement of Russia, Turkey and the United States, internal conflicts such as that of the Kurdish minority on the Syrian border. and Turkey and the emergence of new groups, such as ISIS. Throughout 2020, the Syrian pound devalued by 67.5%, that is, the value of the US dollar increased by just over three times. According to Hanke’s numbers, Syria’s inflation in 2020 was 202 percent.

The fifth and last country whose currency was devalued more than the Argentine peso is Sudan, the poorest in Africa and also a victim of a high level of conflict and a state of civil war that led to the partition of the territory and the independence of “Sudan from the south”. In the year, the Sudanese pound lost two-thirds of its value (that is, the US dollar costs three times what it cost a year ago) and the country suffered an inflation of 236%, according to Hanke’s calculations.

Tied for sixth place in the ranking are the Argentine peso and the Iranian rial, although the strong rise in the blue or free dollar in the last days of the year will probably tip the devaluation balance in favor of Argentina., since Hanke’s dashboard takes into account a period of little more than twelve months, from the end of 2019 until last December 18, when in the free market the dollar traded at 150 pesos, against the $ 166 in which the year. In addition to going through a serious economic crisis, Iran is, according to Worldometers, a world reference site, the second country with an Islamic majority (behind Turkey) with the highest number of cases of coronavirus and maintains a strong conflict with the US, than during the Trump administration it reimposed economic sanctions on Tehran in retaliation for the Iranian government’s nuclear plan.

In the table it can also be noted that the devaluation of the Argentine peso surpassed by about 20 points that of the South Sudanese pound (the country that emerged from the partition of Sudan), the kwacha of Zambia, the dinar of Libya (another country with strong internal conflicts) and the manat of Turkmenistan, and more than doubled the rate of devaluation of the Turkish lira and the Brazilian real.

We use cookies on our website to give you the most relevant experience by remembering your preferences and repeat visits. By clicking “Accept All”, you consent to the use of ALL the cookies. However, you may visit "Cookie Settings" to provide a controlled consent.
Cookie SettingsAccept All
Manage consent

This website uses cookies to improve your experience while you navigate through the website. Out of these, the cookies that are categorized as necessary are stored on your browser as they are essential for the working of basic functionalities of the website. We also use third-party cookies that help us analyze and understand how you use this website. These cookies will be stored in your browser only with your consent. You also have the option to opt-out of these cookies. But opting out of some of these cookies may affect your browsing experience.
SAVE & ACCEPT