I’ve been in Lebanon for the past few days, but not because I’m seeking a replacement for the Princess of the Levant. Instead, I’m here because the Lebanese Institute for Market Studies arranged a briefing in the Parliament on the perilous state of the nation’s finances.

Lebanon is in trouble because policy makers have violated my Golden Rule by allowing spending to grow too fast. As such, even though the overall fiscal burden of government is relatively modest, red ink has climbed to about 150 percent of economic output. That’s higher than Italy today, and higher than Greek debt when that nation’s fiscal crisis occurred.

I’ve pointed out before that there’s not an automatic tipping point when a debt crisis occurs. It happens whenever investors decide that they no longer trust that a government will pay its debt.

I’m not going to predict exactly when Lebanon reaches that point, but I suspect sooner rather than later. Unless, of course, Lebanon changes direction.

And that’s exactly what I’m recommending. I made three points.

First, higher taxes are not a solution. Given the IMF’s awful track record of pushing tax hikes in the region, I repeated my standard joke about arresting any of those bureaucrats who enter the country.

Second, a rule requiring a balanced budget is not the ideal solution. Not because balanced budgets are a bad idea, but because such rules put fiscal policy at the mercy of the business cycle.

This chart showing Lebanon’s revenue makes my point. When there’s strong growth and revenues are increasing rapidly (between 2001-2004 and 2006-2009), big spending increases are possible. But when the economy is weak and revenues are flat (between 2004-2006 and 2009-2016), politicians are very resistant to fiscal discipline during a downturn. 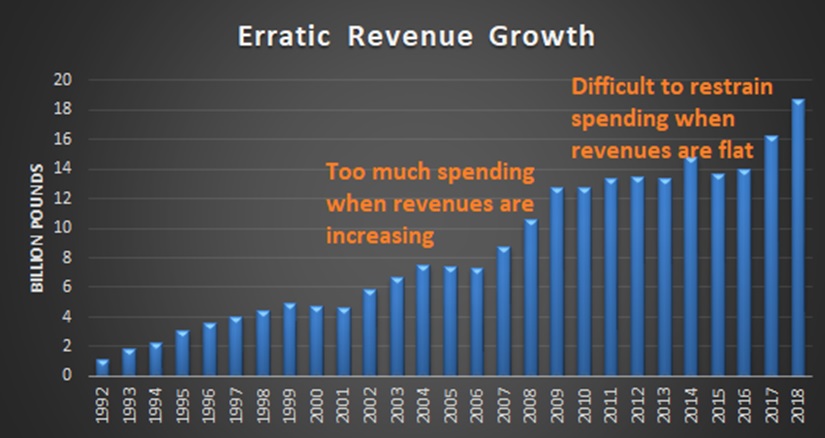 Even the IMF and OECD agree with me that this is a big reason why anti-deficit rules don’t work.

Which leads me to my third point, which is that Lebanon should copy Hong Kong and Switzerland by adopting an annual limit on spending growth.

I didn’t specify a specific number for a spending cap. Instead, I emphasized that the key goal is to make sure spending – over time – grows slower than the private sector.

But I did show what would have happened if lawmakers had limited nominal annual spending increases to 6 percent starting in 1992 (that sounds far too high, but keep in mind that inflation averaged about 4 percent over the past 25 years). 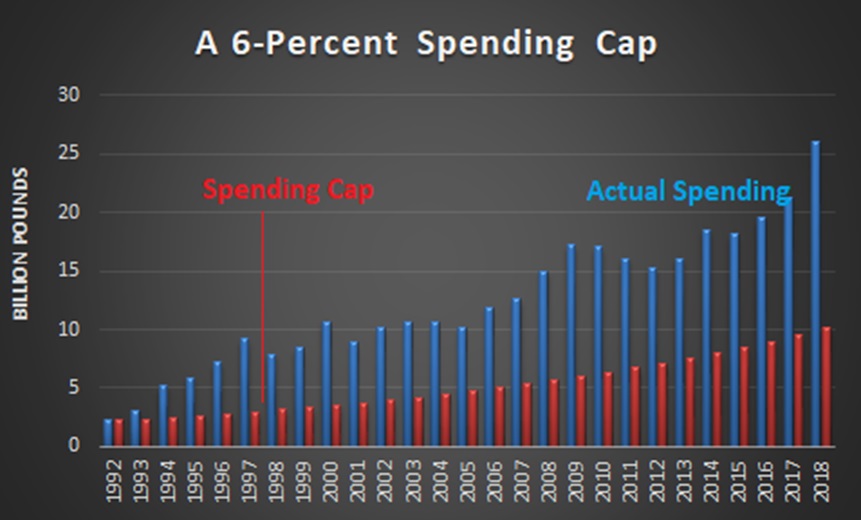 I told the audience that they would have a budget surplus today, and also very little debt, if a spending cap had been in effect (same results would hold for America).

That’s a good recipe for Lebanon. It’s also the right recipe for the United States.